Directed by: Peter Weir
Released on: 24th May 1985
Made in: Philadelphia, United States
Genre: Thriller/Romance
Produced by: Paramount Pictures

A review by a user on Imbd:


A review from The Telegraph:
Few thrillers burn such indelible or contrasting images on to the retina as 1985’s Witness. It leaves you with memories of fields of grain swaying serenely in the warm New England breeze, of a barn-raising that looks drawn from the most elegant 19th-century oil — and of a knifing straight out of a nightmare.
And this is exactly as it should be, as Witness — like many of Peter Weir’s wonderful films — is about people supremely at odds with their surroundings. Here, the Australian director (most recently responsible for Master and Commander) explores the clash of cultures that develops after young Amish boy Samuel Lapp (Lukas Haas) witnesses a grisly murder while on his first trip to town with his mother, the recently widowed Rachel (Kelly McGillis).
Big-city policeman John Book (Harrison Ford) takes on the case, but soon finds himself forced to hole up with mother and son in their God-fearing, pre-technological community. The love story that develops between John and Rachel is one of the most touching in cinema, all the more so for its being both so clearly hopeless and bookended by scenes of sudden, shocking violence.
Nor is it just Rachel who gets under Book’s skin. Having, crucially, been required by her to hand over his bullets — she hides them in a flour tin, from which they later emerge looking like little iced truffles — he is progressively seduced by the Amish way of life, in turn endearing himself to them through his carpentry (a skill Ford himself made use of before turning to acting).
— is Weir’s typically questioning intelligence. Like Book, we find ourselves falling for the stringent Amish existence, but when, for example, Rachel’s dignified father-in-law Eli (Jan Rubes) tells poor Samuel, “Having seen what bad men do, you become one of them”; we suddenly see the chasm between their views and ours.
Witness not only quickens the pulse but also thoroughly engages heart and mind. What more can you ask?


Overall, male and female voted 8/10, however females over the age of 45 found the film more appealing by 0.2% due to the fact the thriller was intertwined with romance, and starred the actor Harrison Ford, a male star that is very popular, and that woman of this age very much admire.

Witness is a film, released in 1985 directed by Peter Weir.  The film stars Harrison Ford, Kelly Mc Gillis, Josef Sommer, and Lukas Haas.  The film follows a young Amish boy who is the sole witness to a murder in a train station, John Book; the policeman in charge of the case goes to the Amish country to hide and protect the Amish boy until the trial.
This film was produced in 1985, a time where Amish communities were not a big part of the outside world, they lived in their own communities amogst one another, they are known for their simple dress, plain living, and maily their reluctancy to adopt any new technology or conveniences of the moderm worlf. These isolated groups of Amish population may have problems within them such as generic disorders and other problems which are caused by closed communities. Their communities made the decisions regarding health, education and relationships, all of these being based on their biblical beliefs. For example; they do not educate the children in the community past the eighth grade, as they beleive that they have the sufficient knowledge in need to prepare their children for the amish lifestyle.

The Movie has portrayed the Amish boy in a way that it is easy to recognise that he is not a 'city boy' and is not from the area, the modern technology is completely new to him, and small things amaze him. 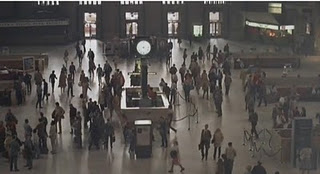 Peter Weir has used a high angle shot over 30th Street Station in Philadelphia. This shot has been utilised to signify that the cluster of people are small and unimportant.  Muted colours and low light have been chosen for this scene to create a sense of a corrupt and tainted station.

At the beginning of this scene; the statue of the ‘Angel of resurrection’ is shown from a low establishing shot, this makes it intimidating and powerful.  It shows that the statue is beyond the Childs’ cultural identity.  It then cuts to show a low angle close up of the boy’s face, this enables the audience to see the boys reaction to this statue that is beyond himself.  From this shot the audience have established that the boy is Amish due to his very obvious and traditional black suit, and hat. The costume reveals to us his identity, and therefore enables the audience to relate his identity to the ways of Amish life.The costume of both Samuel and his mother establish the difference between the Amish country and the corrupt society within America. 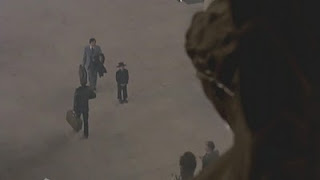 The still shows the high angle shot of the boy from the shoulder of the statue.  It Is almost as if the angel is watching Samuel, and keeping an eye on him.  The boy from this height looks small, this could relate to the fact that he is just one person in a big city. Weir has also used this shot as it connotes vulnerability. The shot connotes a sense of loneliness which contrasts with the previous shot of the crowd of people in the train station. From this we can establish it is a thriller, as the boy, alone in the centre of the screen establishes that he is lonely, this could foreshadow that Samuel will be lonely in the sense that he is the sole witness in the case.
A medium establishing shot is then shown; this establishes location and shows the Amish mother sitting on a bench with Samuel.  This shot indicates isolation as there are no people around.  Samuels’s mother then allows him to go to the toilet; this shows naivety; as representation of American culture is portrayed as dangerous, negative and that the innocent are in danger. The Amish boy then heads into the vanishing point of the toilet; this could indicate that he is entering another dimension and if he comes back there will be a warp, or something that has dramatically changed his life. It is a convention used in thrillers to indicate that something is about to happen. 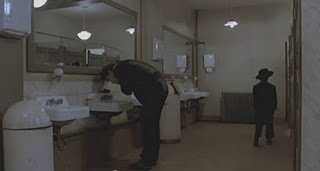 Here Peter Weir has kept the mute lighting and dull, murky colours because this creates tension.  When Samuel has entered the toilet the camera cuts to a medium close up of a 25 year old man wearing a leather jacket, leant over a sink. This indicates loneliness; the leather jacket is also a generic signifier. The toilet is a generic location of the thriller genre; it is claustrophobic, isolated and inelegant..  Peter Weir has used this  generic location for the murder to take place because due to the enclosed claustrophobic spacing, the tension is built up in the audience because the child is trapped within this nightmare and they are eager for him evacuate before he becomes involved with the corrupt characters and society within America this is reflected upon the dirt and filth within the toilets. When Samuel enters the cubical the camera cuts to a close up of the door closing. Diegetic sound is used here when closing the door- this shows it’s important within the film. A low angle of the people entering the toilet, their faces are not shown, and this is how Peter Weir has used enigma within the film. The audience then become aware that Samuel is trapped in the toilet and cannot escape.

Weir uses generic thriller aspects such as  noir lighting, and muted colour. and then cuts to a close up of Samuel watching the violence through the gap in the door, and then cuts to a close up of the knife held in the mans’ hand, a close up has made it more effective, and adds tension and adds intimidation to the shot.  This has been used to foreshadow the events that are yet to happen; it also creates suspense and anticipation within the audience. Peter Weir has usedenigma here- the audience can not see the face of the killer but can identify his race- this is using a stereotype. This also reinforces the negative portrayal of American culture; it has made a negative representation of the dark skinned man. It has also used stereotypes by making the murderer recognisable by his ethnicity. This also contrasts with the representation of the Amish community being lovely and peaceful. They are portrayed as being all as one; safe, everyone knows one another and they are a community of trust. 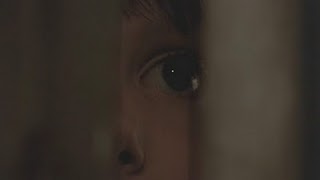 This still shows an extreme close up of the young Amish boy looking out the gap in the toilet door. We can see from this shot that Samuel is distressed and terrified but he has never seen such things, he is being exposed to a new environment and it is this that he is curious about.
Posted by MandyEdmondson at 09:26